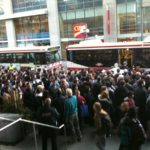 Homicide detectives are investigating after a man in his early 20s was fatally struck by a subway train at Bloor-Yonge station on Monday morning.

Toronto police arrested a man in his 40s in connection with the incident. He was not immediately charged.

Det. Rob North said the victim was on the platform around 10:15 a.m. and “about to get on a train” when he was hit.

“We believe this person was the victim of a homicide,” said North. “We believe he could have been pushed.”

The man was hit by an eastbound train on Line 2. Police don’t believe there was any altercation leading up to the event. The victim was taken to hospital, where he later died.-CBC

Hi Sue, I saw an alert that trains aren’t stopping at Bloor/Yonge. If I’m traveling on the subway eastbound & I need to go to Queen station, I guess I should get off at St George and take the subway from St George to Queen, instead from Bloor/Yonge to Queen, right?

A news story from my TTC nightmares: Police are investigating whether a man who died on the subway tracks at Yonge and Bloor may have been pushed https://t.co/wt8aKuRSrH

MEDIA ADVISORY: Detective Rob North of @TPSHomicide will update media, 2:30 pm, northeast corner of Bloor & Yonge, re: incident at Bloor Subway Station | @bradTTC will be available at this time too ^mg

The subway's Line 2 is now stopping at the Bloor-Yonge station.

#breaking full service has just resumed on subway at Yonge and Bloor after man died after being pushed onto to tracks @CityNews for more.

Soooo during a heat wave, the subway bypasses yonge and bloor. Makes me get off at bay to walk back. And then what? Shuttle bus up north? I hate life right now.

WTF IS GOING IN WITH THE @TTCing @TTCnotices @TTChelps !!! Waiting 30mins for shuttle at Yonge &Bloor. To only get dropped off at Broadview. To THEN have the cops tell us the subway us still closed. Shuttle bus driver also hasnno idea what's going on. He goes to find out. We now

Hey #Toronto friends; the subway is currently shut down between St George + Chester, as well as St Clair + Bloor.
Shuttle busses are happening but stuck in constant gridlock near Yonge.