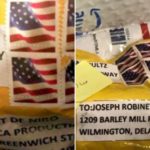 A 56-year-old man has been arrested in Florida in connection with a mail-bombing campaign aimed at critics of President Donald Trump.

US officials named the man as Cesar Sayoc, saying that more arrests could follow.

Mr Trump said the acts were “despicable and have no place in our country”, and promised “swift and certain justice”.

Twelve items have been sent in recent days to figures like ex-president Barack Obama and actor Robert de Niro.

The latest two were found in Florida and New York City on Friday. -BBC

I’m only going to be sharing materials on this story verified by @BuzzFeedNews’s breaking desk because they are very, very good at this by now —> Pipe Bomb Suspect Cesar Altieri Sayoc's Social Media Is Filled With Pro-Trump And Anti-Democrat Memes https://t.co/BMoRhb2wsC

The suspect in the bombing case, Cesar Sayoc, is a registered Republican with a criminal history dating to 1991.
It includes felony theft, drug and fraud charges, as well as being arrested and accused of threatening to use a bomb.https://t.co/2aXjHaeKrx

DNA evidence played a role in the arrest of Cesar Sayoc, Jr., 56, the officials said.

The suspect is a registered Republican, according to records.https://t.co/ciFPKyqutc

Cesar Sayoc, a Florida man identified as a suspect in the suspicious mail bombings, has a history of arrests, including one for a 2002 bomb threat https://t.co/14ix0zIHeI

A Florida man was arrested on Friday in connection to the string of mail bombs sent to prominent Democrats. Public records show he had a lengthy criminal history dating back to 1991, including being accused of threatening to use a bomb. https://t.co/U0KoOmIjcA

This is what the bomb suspect had plastered all over his van windows pic.twitter.com/dufwq78SFj

Details on the pipe-bomb suspect.

They finally caught the bomb suspect. Is he Hispanic white? pic.twitter.com/La2tIaNvUo

*If* The pipe bomb suspect has been correctly identified, (as 56 y/o Cesar Sayoc) worth noting that according to Lexis/Nexis, he runs a couple of companies with “Native American” in the title pic.twitter.com/AXRPwifB4k

BREAKING: A suspect has been taken into custody in connection to the multiple bombs sent to 2 former Presidents, James Clapper, Cory Booker and others.

Let's all pray that this puts an end to this terroristic activity!

Amazing how everyone holds their breath in anticipation of finding out the mail bomb suspect’s political affiliation forgetting that while BOTH sides are to blame for this toxic political climate, the perpetrator is solely responsible for his actions.