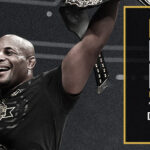 Las Vegas – UFC® today announced that former UFC light heavyweight and heavyweight champion Daniel Cormier will be inducted into the UFC Hall of Fame’s ‘Modern Wing’ as a member of the Class of 2022. The 2022 UFC Hall of Fame Induction Ceremony, presented by Toyo Tires®, will take place on Thursday, June 30, at T-Mobile Arena in Las Vegas. Tickets can be purchased via AXS. The event will be streamed live and exclusively on UFC FIGHT PASS® starting at 7 p.m. PT.

Daniel Cormier is widely known in the UFC world as an all brawler but with exceptional skill. Daniel Cormier is one of the greatest ambassadors for UFC, and wears the culture of martial arts second nature. Dana White expresses, “DC faced the greatest athletes in the world on every level of wrestling and MMA. He is also the ultimate professional. As an active fighter, he always took time for the media, which led him to become one of the best TV analysts in all of sports. DC is one of the greatest ambassadors UFC has ever had, and it’s going to be an honor to induct him into the UFC Hall of Fame this summer.”

Cormier enters the UFC Hall of Fame with an impressive resume that includes:

Posted in Entertainment, Sports and tagged Daniel Cormier, grindface, kcm, MMA NEWS, UFC, UFC HALL OF FAME
← Alec and Hilaria Baldwin all about Baby #7Dua Lipa “All I ever wanted was for it to be about the music” Exerts of a Vogue Article →