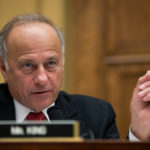 “White nationalist, white supremacist, Western civilization — how did that language become offensive?” Rep. Steve King (R-IA) said in an interview with the New York Times’s Trip Gabriel published Thursday morning. “Why did I sit in classes teaching me about the merits of our history and our civilization?”

King’s comments are about as clear a commitment to white racial politics as you can get. They weren’t from a private meeting that was recorded, or masked in coded language, but in an on-record interview with the country’s paper of record.

King, who is perhaps the most aggressive advocate for immigration restrictionism in Congress, has never really bothered to hide the racial animus underlying his politics. He has retweeted a neo-Nazi, warned of immigrants with “calves the size of cantaloupes” smuggling drugs across the border, endorsed a white supremacist running for mayor of Toronto, and written that “we can’t restore our civilization with somebody else’s babies.”

But openly musing about how being a “white supremacist” or “white nationalist” shouldn’t be offensive makes the subtext text.-Vox