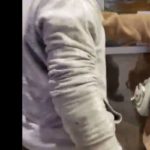 The incident originally happened on November 12, 2018, at a restaurant on Lansdown and Queen St. Police reported that the 44-year-old suspect was inside the restaurant when another gentleman walked up to him after which the suspect knocked the victim out cold. The victim was also stomped on and kicked while he was still unconscious after which the victim was brought to the hospital and treated for minor injuries. The suspect originally fled on foot but police released the video taken by the cameras located in the restaurant today.

The Toronto Police Service requests the public’s assistance in identifying and locating a man wanted in an Assault investigation.

On Monday, November 12, 2018, at 1:19 a.m., officers were dispatched to an Assault call at a restaurant in the Lansdowne Avenue and Queen Street West area.

Anyone with information is asked to contact police at 416-808-1100, Crime Stoppers anonymously at 416-222-TIPS (8477), online at www.222tips.com, online on our Facebook Leave a Tip page, or text TOR and your message to CRIMES (274637). Download the free Crime Stoppers Mobile App on iTunes, Google Play or Blackberry App World.  -Toronto Police