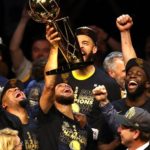 3x champ with the @warriors… @StephenCurry30!

Lebron “No Excuses” James Would Like the World to Know He Played The NBA Finals with A Broken Hand https://t.co/uppHkIBWRx pic.twitter.com/oEPkAl9Wmv

LeBron James finished with 748 points this postseason. That is the 2nd-most points in a single postseason in NBA history. Michael Jordan has the most with 759 points in 1992. pic.twitter.com/jJzYHJfVKl

Three @NBA Championships out of the last four years. Congratulations to the @warriors and the entire Bay Area on a dominating performance in this year’s #NBAFinals. Now you need another championship to add to the collection! #DubNation pic.twitter.com/Ouhiruur0m

In this year's NBA Finals, there were 54 plays that ended with Stephen Curry on LeBron James. Curry held LeBron to 12 points, and the Cavaliers shot 36% as a team on those plays. pic.twitter.com/8MpLioh7Sa

The Warriors didn't ruin the NBA, the rest of the league just needs to catch up https://t.co/pRQN5MbHJd

The Warriors are the 4th different NBA franchise to win at least three titles in a 4-season span, joining the Lakers, Celtics and Bulls. pic.twitter.com/DXSJ3k0IIR

Posted in Sports
← When Will Mental Health/Depression Be Taken Seriously?LowKeyOFTB from The New O.F.T.B Interview →