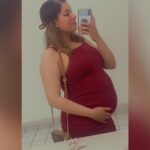 Following an argument at a family BBQ three people were shot and two others were injured. The victims identified as 24 year old Buendia who was 29 weeks pregnant at the time, 24 year old Mariano Escareno, and Rafa Campos all of whom were related. The two other victims died on the scene however medical units were able to bring Buendia to the hospital to perform an emergency delivery of her daughter Rosalina. Buendia died shortly after the surgery.

Josh Tello has visited his daughter, Rosalina, in the hospital every day this week.”It really brought me joy and a little bit of comfort, knowing that Laura’s going to live on with our baby and she’s going to watch over us,” he said. He’s been visiting the hospital every day and brings Rosalina photos of her mother. Despite being 11 weeks premature, she’s doing well. She’s growing. Tello marvels over the tiny girl’s grip. He likes to hold her feet. They’re getting long, and she has so much hair — dark like her parents’! When she’s older, he’ll tell her of her mother. “How we started dating, how we started talking. She always loved to bake and to see other people smile. She was so sweet and kind. Family was everything to her, so I’m going to teach her the way of the family, too,” he said. -CNN