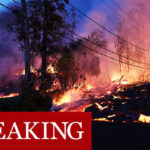 Fast-moving lava from Hawaii’s Kilauea volcano forced officials to close part of a highway on Tuesday, and they warned that sharp, thin strands of volcanic glass fibres carried by the wind could injure eyes and lungs.

As lava crossed Highway 132, officials shut a stretch of road from Lava Tree State Park to Four Corners and told residents who had not evacuated to leave the area immediately.

The lava flow destroyed a farm where Kevin Hopkins and partners raise tropical fish and the ornamental carp known as koi.

“It just came over and ate the farm, boiled the water out of the ponds,” Hopkins said.-CBS News

Hawaii's Kilauea volcano: Heed evacuation orders, or you're on your own, mayor says https://t.co/6NpYUfsDpj pic.twitter.com/Nwd7YWfOWN

This is so scary. I wonder why is this person still in the house. GET OUT!! ??#Hawaii #Volcano #Lava #Kilauea #Footage #WildNature #KilaueaVolcano #Video #Hell pic.twitter.com/HCmSkVwNcS

Hawaii volcano: How many people do volcanoes kill? https://t.co/WuFuUzybLS pic.twitter.com/hBejWHpSnP

#Hawaii officials are advising more residents of a rural Big Island district to evacuate because of approaching #lava from Kilauea #volcano. >> https://t.co/wi6kww2Rej pic.twitter.com/H9z92SYIxC