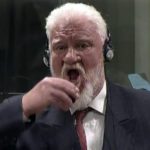 A former Bosnian Court General Slobodan Praljak was sentenced to 20-years for war crimes he committed during his time as General.  The General declared, “I am not a war criminal” when his sentence was upheld by UN judges on Wednesday. Slobodan Praljak (January 1945 – 29 November 2017) was a Bosnian Croat engineer, television director, and businessman. Between 1992 and 1995, he served as general in the Croatian Army and the Croatian Defence Council a subsidiary of the army of the Croatian Republic of Herzeg-Bosnia. Praljak was indicted and voluntarily surrendered to, the International Criminal Tribunal for the former Yugoslavia (ICTY) in 2004. In 2013, he was convicted of war crimes against the Bosnian Muslim population during the Croat–Bosniak War alongside five other Bosnian Croat officials.He was sentenced to 20 years in jail. An appeal was heard in early 2017; upon hearing the guilty verdict upheld in November 2017. -Wiki(paraphrased) 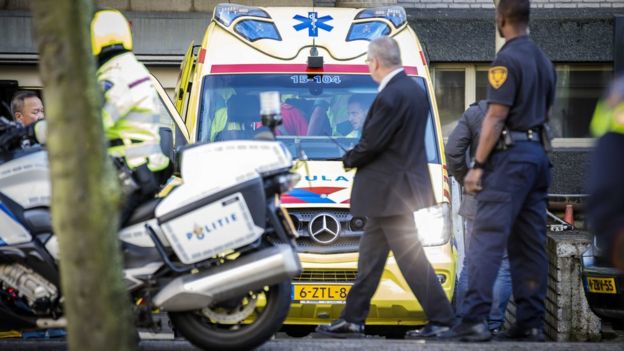 Traces of a deadly substance were found in the vial. the Dutch public prosecution service said. “We cannot yet say what that substance was,” spokesman Vincent Veenman told AFP news agency. “Further testing is needed.”-BBC

Praljak then indicated to the courts that he drank a poison that he smuggled into the courtroom via a small bottle after which he was rushed to a hospital where Slobodan later passed away. 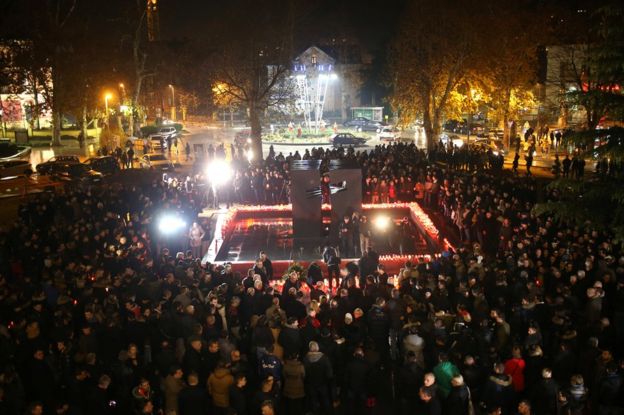 Praljak was 72 at the time of his sentence which means he would have been 92 upon his release. He was a philosophy professor and theatre director. After news of his demise, hundreds gathered in Mostar to mourn the passing of the convicted war criminal.

The International Criminal Tribunal for the former Yugoslavia upheld the sentence which would have to be served for a minimum of 10 years and a maximum of 25 years. 5 other Bosnian and Croat wartime political and military leaders were also convicted for their part in a plan linked to Croatia’s late former president Franjo Tuđman to systemically discriminate, commit acts of violence against, and to deport Muslims.

However, Croatian President Kolinda Grabar-Kitarović went on television to say Croats needed to admit that some of their compatriots had committed crimes in Bosnia.

In Bosnia itself, Dragan Čović, the Croat member of the tripartite presidency, said his suicide showed “what sacrifice he was ready to make” to show he was not a war criminal.-BBC

While many are questioning how Praljak got the poison inside the court, it was reported that the devices that scan for deadly weapons do not pick up substances specifically the poison he has on his person.

Praljak among other things was convicted of murder and inhumane treatment.

There are questions about how Praljak acquired the substance, and whether it was supplied to him by a visitor to the fortress-like UN detention centre in Scheveningen, near The Hague, where Praljak was being held.

Under court rules, everyone entering the detention centre is subject to tight security “irrespective of his or her status, nationality, function or age”. Everyone must pass through security scanners and there may also be a search of clothing.

Detainees are allowed to have access to their medications, administered under the supervision of the chief medical officer. They are allowed approved visits from personal doctors.

The Dutch newspaper NRC said many of the suspects there were elderly and “suffering from all sorts of illnesses”. It said it was “not unusual that he could have brought his medication to hearings”.-The Guardian

Good riddance! Fuck him and every #croatian who is mourning over his death. I will #Prost, #Cheers, #proost to his death Take him to the garbage disposal. #Praljak #Slobodan pic.twitter.com/xy46jPgvsm

The pictures of #Slobodan #Praljak ingesting the poison can only compare to this eerie one. pic.twitter.com/3A64JEVXH5

#Slobodan #Praljak did not go gentle into that goodnight. #Hague has committed murder. (Was he not in custody?)

Everyone is talking of #Slobodan #Praljak taking poison at #ICC but where did he get it? @BBCBreaking @cnnbrk @KTNNews The court didn't take him perhaps seriously of his claims

A crime is always a crime no matter if it takes place during wars and any war is the biggest crime.#WarCrimes #death #suicide #Croatia #Balkans #Yugoslavia #Bosnia #poison #Peace #RIP #Slobodan #Praljak #Europe #war

Absolutely beautiful
you are my hero
God bless you #Slobodan #Praljakhttps://t.co/GlS0pYujLg