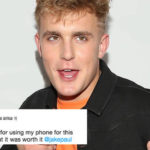 me @ shane dawson for making me like jake paul pic.twitter.com/8nb01O75UL

jake paul: the martinez twins called me a CRACKER ???

Me after watching @shanedawson 8 part series on Jake Paul pic.twitter.com/sXXG3uNWxm

Thank you @shanedawson for showing the true side to Jake Paul. It all makes sense now. Absolutely phenomenal series.

I have no issues in saying I am now a fan of Jake and his lovely girlfriend Erika who I honestly think are perfect for each other.@jakepaul @erikacostell

Shane Dawson and Jake Paul heading to the build the wall rally pic.twitter.com/0jWuE01Io9

So far my favourite part of @shanedawson’s Jake Paul series is when he very earnestly tells Jake: “yeah… but it’s not your teacher’s job to teach you not to set your back yard on fire…”

A derogatory term used to describe people of an hispanic origin.

Them beaners are taking over Los Angeles. -Urban Dictionary

just a reminder folks: the new shane dawson video is the same running time as eternal sunshine of the spotless mind (2004). so would you rather watch one of the greatest films of the 2000s or a video about a racist youtuber that makes you sympathize with fucking jake paul?

Finished the Jake Paul series. Confused at all the backlash for Shane trying to “victimize” Jake. All he was doing was showing every side of the story and giving everyone the chance to see things from a different perspective. Nobody’s forcing to u like Jake Paul lmao.

The Mind of Jake Paul – The Finale
Tomorrow
this one is going to be different then the rest of them. more raw. and I'm so proud of this video and so grateful for Jake for trusting me. pic.twitter.com/xfPfETRKSW

poc & women: jake paul is really awful and abusive and it really sucks that you gave him an 8 part platform to explain his "side" of the story

shane: THANKS for ur support guys ugh FUCK the haterz!

just finished the Shane Dawson series and can you believe I still don’t like jake paul pic.twitter.com/YiIZjIrVkz

Like Jake Paul isn’t racist. There is a HUGE difference between telling a racey JOKE, and an actual racists. Pull Jake Paul back 50 years, and people would probably bash him for not being racist enough. Y’all calm your tits. Racism isn’t the (MAIN) problem.

he really said calling a white person cracker is the same as calling a Hispanic person a beaner….but jake paul has changed right ?pic.twitter.com/6ia9w4tmL5

Why's everyone forgetting about the fact that Erika was Alissa's best friend, but was secretly flying girls in to hook up with Jake Paul, while pretending to Help alissa get through it all and then when Alissa leaves she starts shading her and hooking up with Jake herself pic.twitter.com/vm5IbKGOTh

shane dawson thinks im gonna sit here and watch an hour and 45 minutes of him trying to make me like jake paul pic.twitter.com/GgNJYTFntU

In the finale of Shane Dawson's series, I'd be interested to see Jake Paul address some of this content he recorded with kids. You can't ask a baby to agree to cry or act terrified. pic.twitter.com/xezxEa8WMa

Jake is manipulating Shane using him for redemption. The series made us feel pity him blame others for his mistakes when he is an adult. He and Erika only act nice in front of Shane but they abuse others behind just watch @thenerdcity video exposing Jake https://t.co/7KWLvZiKPa

Me going back and forth in my brain if I feel bad for Jake Paul or not pic.twitter.com/RjgggGfRsu

Looking through the comments and tweets related to Jake Paul and Shane Dawson pic.twitter.com/pE8t5cs5HG