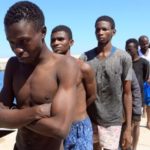 Libya which means servant in Arabic has had a long-standing issue with slavery and various human rights violation; and, the small nation has been in the media this week for recent reports that the slave run country refuses to acknowledge UN sanctions in regards to Human Rights. 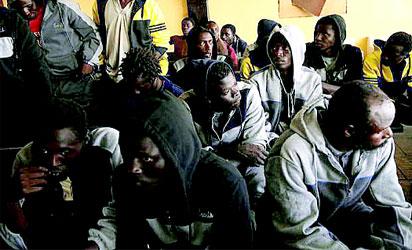 Protests meanwhile took place outside the Libyan embassies in several other African capital cities including Bamako, Mali and Conakry, Guinea over the weekend. Another protest is planned in London later this week. A protest outside the Libyan embassy in Paris spilled out into the famous Arc De Triomphe roundabout at the heart of the French capital. -DW

The media wildfire started when Libya’s UN-backed government started a probe into the allegations of hundreds of African refugees disappearing and presumed to be passing through Libya to be bought and sold as modern day slaves.

Foreign Affairs Minister, Shirley Ayorkor Botchwey is expected to appear before Parliament to answer questions about the Libyan slave situation. In an urgent question filed by North Tongu MP, Samuel Okudzeto Ablakwa Tuesday, the Minority is demanding answers on whether some Ghanaians have been caught up in the situation. Hundreds of African migrants are reportedly being sold in open slave markets in Libya.-MyJoyOnline

The UN held a session this past Monday and many of the speakers urged urged for their to be a formal investigation into the issue. UN Secretary-General Antonio Guterres said in New York on Monday that “slavery has no place in our world and these actions are among the most egregious abuses of human rights and may amount to crimes against humanity,” appealing to the Libyan leadership to investigate these cases and bring those responsible for the slave trade to justice.-DW

Discussed with PM Serraj of Libya how to cooperate to bring perpetrators of slavery and human trafficking to justice. #AUEUsummit. pic.twitter.com/iaXflLTBtb

The slave trade in Libya must be stopped. The west used Military force to help the rebels remove Gaddafi. I believe that gives the West the moral obligation to get this country back on a healthy footing. Remove the slave holders by force and help establish a stable leadership

Slavery exists. TODAY. In Libya and beyond. I found this article incredibly informative in how we can help. Please have a read and share. And thank you @bustle. More outlets should we talking about this. https://t.co/nPGkxMADWX

I REPEAT FOR THE MILLIONTH TIME: The presidents tweets have real impact on the world. There are slave auctions happening in Libya, and the president's childish social media antics allow the powerful in Libya an out. https://t.co/v3eaqFWhJa