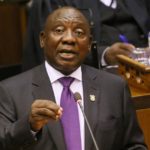 The South African government is going through a restructuring within their cabinet and the long standing battle to lower corruption within the cabinet is now trending on twitter.

South Africa’s new President Cyril Ramaphosa  was described in a press conference early Monday the “kind of leader that South Africa needs at this moment.” The new governement plans on adressing youth unemployment and training through partnerships within the continent and beyond.  There is also a heavy focus on fighting corruption within the various parties that can be found in South Africa as well as strengthning infastructure and corporation between political parties in a means of empowering the entire country.

Monday’s cabinet reshuffle also saw Ramaphosa add new faces and remove some ministers allied to Zuma, who was ordered by his own African National Congress party to step down two weeks ago.

His nine years as president were marked by multiple corruption allegations, economic mismanagement and disputed appointments. Zuma denies any wrongdoing.

Ramaphosa, 65, hailed a “new dawn” after his inauguration and has promised to fight the corruption corroding Africa’s most industrialized economy.-USN

I assume the appointment of Bathabile Dlamini at the ministry of women is because it’s going to be the first to be dissolved in the cabinet review. It was a ridiculous ministry from the beginning and has achieved next to nothing. Two birds, one stone. #CabinetReshuffle

Speaking on behalf of all SA women, from now on,, we are all males until Bathabile is removed. #CabinetReshuffle ??

How can Malusi Gigaba be Minister of Home Affairs when he has a history of not being able to handle his own home affairs? #CabinetReshuffle pic.twitter.com/r46zSOQzNx

Bathabile Dlamini has essentially been rewarded with a promotion into the presidency regardless of the fact that she nearly collapsed the social grants system for the poor. #CabinetReshuffle

The new Deputy President of the Republic of South Africa is David Mabuza. #cabinetreshuffle pic.twitter.com/h7mIPrhp26

Naledi Pandor has 3 university degrees to her name: BA in History and English. Masters from University of London, Pandor was awarded her MA in Linguistics at Stellenbosch University in 1997. #CabinetReshuffle pic.twitter.com/PnG5uC6FEx

#CabinetReshuffle Astoundingly Bathabile Dlamini speaks for women and Malusi Gigaba heads up Home Affairs. Was this the price @CyrilRamaphosa paid for bringing back Nhlanhla Nene as Finance Minister and putting Pravin Gordhan in charge of Public Enterprises?

This #CabinetReshuffle is about CR & NEC moves to stabilise party and state for provincial & national victory in 2019. Some compromises with this goal in mind sensible.

Posted in News and tagged south africa
← Prime Minister Trudeau’s recent trip to India has caused quite the stir on social media.Social Media reacts to the passing of James Bond director Lewis Gilbert →