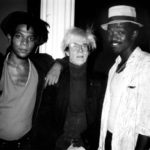 Jean-Michel Basquiat is featured on Vogue Paris’s website in their Icon of Style feature.  Basquiat, a black American; grew up in Brooklyn New York and died in 1988 at the age of 27.

Basquiat’s work is one of the few examples of how an early 1980s American Punk, or graffiti-based and counter-cultural practice could become a fully recognized, critically embraced and popularly celebrated artistic phenomenon, indeed not unlike the rise of American Hip Hop during the same era.-TheStory

Jean Michel was a model for Comme des Garçons in 1987 and  a lover of cuts by Issey Miyake, the pioneer of the New York Underground movement has fashioned a nonchalant style spiced with leather jackets and loose shirts, all infused with his Haitian roots. In honor of the exhibition dedicated to him at the Louis Vuitton Foundation from next October, flashback on the style of this fan of painting._Vogue