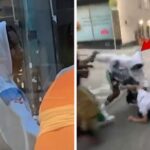 ASAP Rocky has been arrested in Sweden and accused of aggravated assault.

Prosecutors say it’s to do with a fight on Sunday in the capital Stockholm, where he’d been playing at a festival called Smash.

A video, since published online, appears to show him punching another man in the street.

But the rapper has also put videos of his own up on social media. He says they’re from before the fight and they show the man following him.

Of the other three, two are suspected of aggravated assault and one of assault.

In the videos on ASAP Rocky’s Instagram, he and the people he’s with repeatedly tell a pair of men to stop following them.

One of the men, though, accuses the rapper’s team of breaking his headphones. -BBC