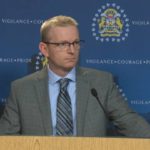 “Despite the circumstances of where the body was located, investigators do not suspect foul play and the death remains classified as undetermined,” police said in a release.

Poole said it’s possible someone crawling through a vent or duct fell from above and got stuck in the wall.

“That would be the most logical at this point … that it was from above,” she said.

“So that is obviously something they would be looking at is someone crawling through the ventilation system.”-CBC

Calgary police are investigating after the body of an adult was reportedly found in a wall at the Core Shopping Centre. #yyc https://t.co/bu83CEObDe

Happening now: Calgary Police are investigating an undetermined death after a body was found this morning inside the wall of the 4th floor women's bathroom at the Core Shopping Centre. Police it's believed to be the wall where toilets are mounted, pictured here. #yyc pic.twitter.com/vzylcBne7N

A worker has discovered a body inside washroom wall at CORE shopping centre in downtown Calgary. #yyc https://t.co/13Ar54m2sr pic.twitter.com/bD8rPHkBPB

Calgary police are investigating after the body of an adult was reportedly found in a wall at the Core Shopping Centre. #yyc https://t.co/bu83CEObDe

They found a body inside the wall of the washroom I use every day at work. How's your Monday going? #yyc #calgary

Reporter @meyer_lucas is following the story and will bring us the latest details when they are available. pic.twitter.com/itTU4hVjsE

Maintenance worker finds a man's body behind a wall panel in the womens washroom next to the food court at Calgary's Core Shopping Mall https://t.co/Biij51xeO8 pic.twitter.com/nc7e86TQ64

.@CalgaryPolice said earlier today it was a man's body discovered in the wall of the women's washroom at The Core mall in downtown #yyc. The gruesome discovery was made by a maintenance worker called in Monday morning to fix a toilet. More updates here: https://t.co/o8hnnqVd1Q

Body found inside wall of washroom at Calgary shopping mall..

Posted in News
← Zlatan IbrahimovicDoug Ford planning to sell the greenbelt to the highest bidder? →