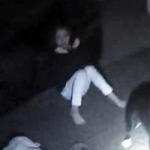 Wichita, KS — Earlier this year, a cop was fired after he shot a little girl inside her own home while trying to kill her dog. Showing that they are willing to hold their own accountable, the officer was charged with felony aggravated battery in March. And now, months after the original incident, the video has finally been released from the officer’s body camera.

In January, Betts was placed on administrative leave after discharging his firearm inside a family’s home—in the cowardly attempt to kill a dog. Then, in an actual moment of accountability, Officer Betts was fired and in March  he was charged.

The officer was hired last January and barely made it a year before being fired.

According to Kansas.com, Betts was the first cop in decades to be charged in an on-duty shooting that resulted in an injury or death.

According to the family’s attorney, the girl, hit by bullet fragments, was so directly in the line of fire when the officer shot at her dog that the flashlight he shined from above his gun barrel illuminated her face right before he fired. Indeed, this has now been verified by the video.

The video shows Betts and his partner approach the house with flashlights and enter through the front door. When they enter the house, several children are seen in the living room watching television. 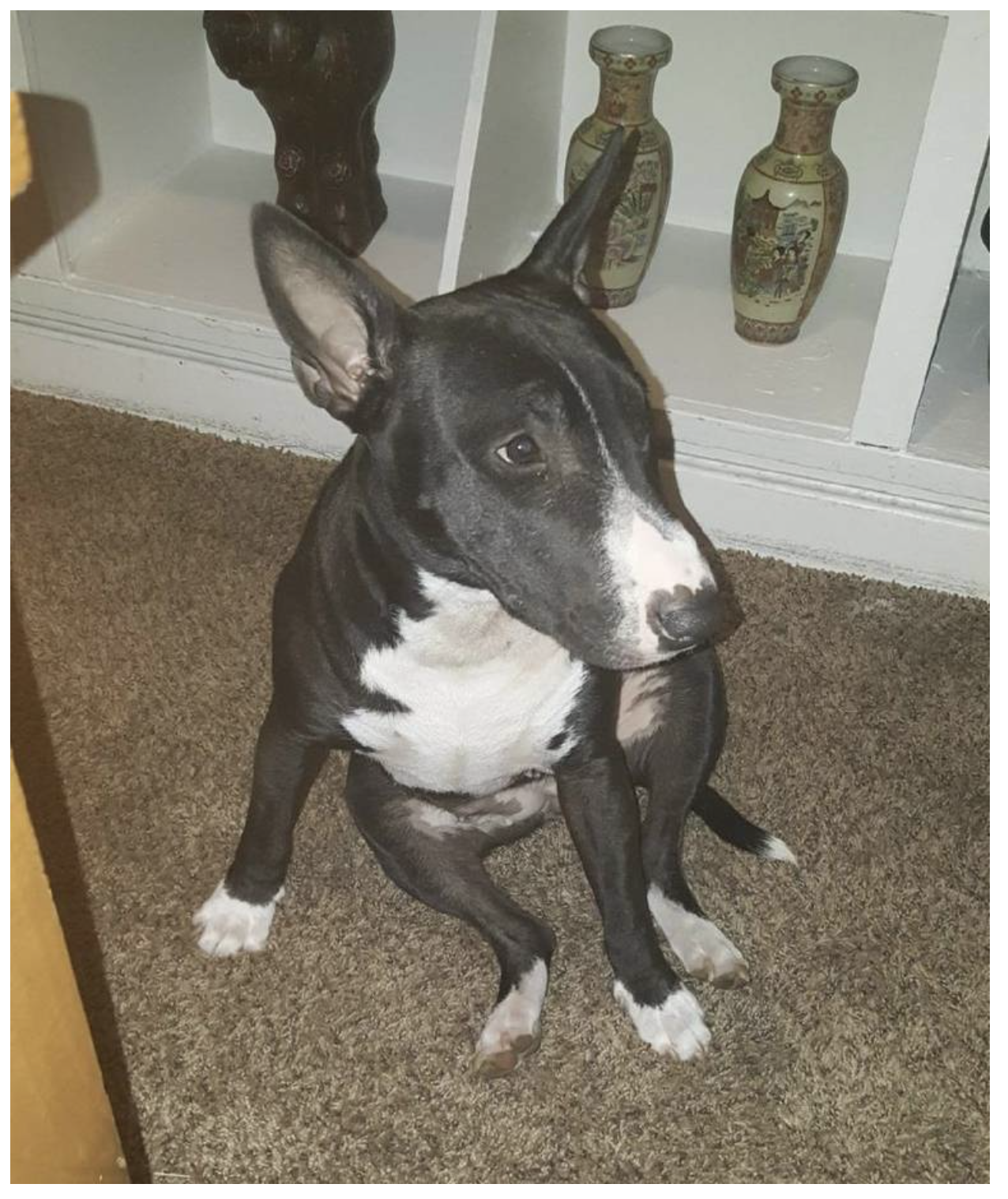 Betts checks the hallway and then returns to the living room where he becomes frightened by the family’s medium sized English bull terrier named Chevy.

Then, with careless disregard for the children in the room, Betts puts the lives of multiple innocent lives in danger to shoot at a dog who just barked at him.

“Ow! Ow! Ow, you hurt my eye! Ow! Ow!” the girl begins to yell immediately. Her screams are absolutely heartbreaking.

Betts then orders all the children out of the room. When dispatch asks Betts over the radio what happened, he tells them the “Dog inside attacked us.” Apparently barking is now an attack.

According to the charge against him, Betts “did … unlawfully and recklessly cause bodily harm to another person … (the child) in a manner whereby great bodily harm, disfigurement or death could have been inflicted, to wit: firing a handgun at a dog while a child was in the room.” 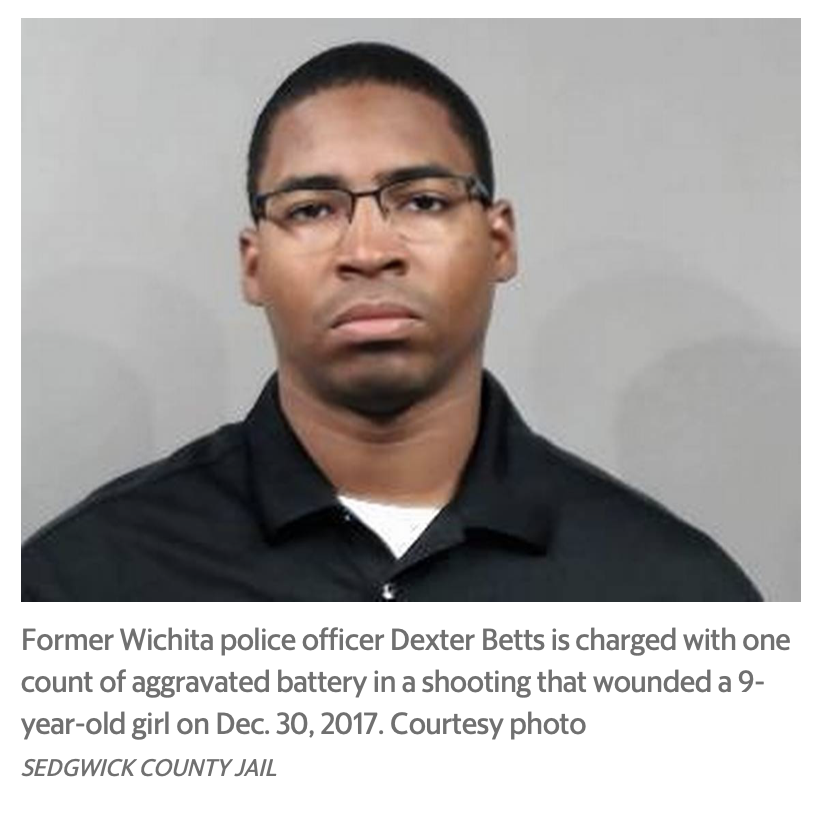 Naturally, Betts’ attorney, Jess Hoeme says her client did nothing wrong and was totally in the right when he nearly killed a little girl to prevent the possibility of her small dog biting him.

“I expect that this will be litigated at length because I firmly believe that Mr. Betts did not act recklessly under the circumstances, and we look forward to presenting our defense in court,” she said.

As Kansas.com reports, Charley O’Hara, attorney for the girl’s family, said the child’s mother is pleased.

“She said she was happy with the charge that was filed, and it was the correct thing to do.” Still, because of the shooting, “the girl is still struggling,” O’Hara said, without elaborating.

According to the report, O’Hara praised District Attorney Marc Bennett, whose office filed the charge: “I think it is a big deal. I think there’s a tendency of certain government officials to treat law enforcement officers differently than the regular public for the same acts, and it appears that Mr. Bennett is treating everyone equally, which is very admirable.”

As KAKE reported at the time, officers were called at around 6:15 p.m. to the report of a domestic disturbance and suicidal person in the 1500 block of North Gentry, near 13th and Hillside. Officer Paul Cruz said in a news release that officers were told a 33-year-old man in the home had held a gun in his mouth and choked a dog.

When officers arrived at the home, instead of getting the woman and four children to safety, they went in guns blazing after learning that the gun the man had held in his mouth was under a pillow in a bedroom.

The poorly aimed shot then ricocheted off the floor and a fragment of the bullet struck the innocent 9-year-old girl in the forehead just above her right eye. Had the bullet struck just an inch lower, the poor girl could’ve been permanently blinded or worse.

Danielle Maples, the girl’s mother recounted the horrifying experience to the press noting that her daughter was sitting down on the couch when she was struck in the head. Also, her 6-year-old son was standing right next to the officer when he fired not one but two shots.

The little girl was brought to the hospital and treated for her injuries. Luckily, Maples’ three other children were not physically injured. However, the emotional scarring left by this experience could last a lifetime.

Maples explained how at the hospital doctors removed three fragments of the bullet from her daughter’s head showing just how close she’d come to being blinded.

Wichita Police Chief Gordon Ramsay reportedly told Maples in a phone conversation after ge watched the video “that what he witnessed was not only morally wrong but against their protocols and training.” He didn’t say why, she said.

As for the suicidal man in the home, luckily he was not killed and completely cooperated with police. He was also brought to a hospital where he was given a mental health exam, according to the police statement.

Posted in News and tagged cop, face, kid, shooting
← Life in Prison for Killing a Pedophile