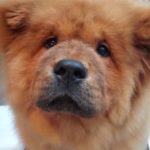 Tomorrow's front page: Police were blasted for caging a fluffy puppy under the Dangerous Dogs Act after it gave a cop a minor nip https://t.co/tLnDHjqz6I pic.twitter.com/gzvgrelGB4

Thousands of people are campaigning to free Bungle, a four-month-old puppy locked up by Northamptonshire Police after it escaped its home and bit an officer https://t.co/PPC6OSuqU3 pic.twitter.com/CV9hWnHmsV

I love this dog #bungle glad he is home ??? pic.twitter.com/CTzo2JbmFC

I love this dog #bungle glad he is home ??? pic.twitter.com/CTzo2JbmFC

A four-month-old puppy caged for biting a police officer has been released.

Bungle the chow-chow was held by Northamptonshire Police for more than four days after escaping from home – sparking anger among pet lovers who demanded his release.

He was seized under the Dangerous Dogs Act but returned earlier after his owners agreed to a Voluntary Control Order (VCO).

Police said public safety was the “priority in such situations”.

Bungle was detained after being spotted under a lorry by an officer, who was bitten as he tried to grab the dog.

Writing on social media, owner David Hayes said the pet had sneaked out of the family home in Stoke Bruerne, near Towcester, on Friday.

Mr Hayes said his 15-year-old son Joseph “broke down at school” when he found out he may not see the puppy again until the new year.

He said they were “massively regretful” about the officer’s injury but criticised the “inflexibility” of police’s “zero-tolerance stance”. -BBC

Bungle, the Chow puppy seized by police after he nipped an officer, has been returned to his owners: https://t.co/rZbMb70Go2 pic.twitter.com/ubcKuW5wIm

Great news and the right course of action due to the bite level. Glad the officer is recovering well. Well done to owners for keeping their heads and obviously loving their dog. Good luck #FreeBungle Stay safe.