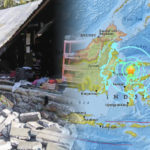 A strong tsunami triggered by a magnitude 7.5 earthquake has hit a coastal Indonesian city, officials say.

Waves of up to 2m (6.6ft) high swept through Palu on Sulawesi island, not long after authorities had lifted a tsunami warning.

Video on social media shows people screaming and fleeing in panic and a mosque amongst the buildings damaged.

Officials have reported five deaths – but it is not clear if those were as a result of the tsunami.

Last month, a series of earthquakes struck the Indonesian island of Lombok, killing hundreds of people – the biggest on 5 August killed more than 460.-BBC

so guys 3 hours ago an earthquake occured in Sulawesi, Indonesia, followed by a tsunami. the scale is big, it was 7.7 M. the damage are very bad, many houses are reportedly vanished, hundres of ppl were injured. so let's pray for the victims there ? #PrayForDonggala pic.twitter.com/49dbwpVOtN

Sending my deepest thoughts & prayers to the people of Indonesia, please stay safe and keep all your family, friends & loved ones close by.#PrayForDonggala

A 7.7 magnitude earthquake has hit Indonesia, in South West Sulawesi.

Aftershocks are a serious risk following an earthquake. If you're in the affected area remember: pic.twitter.com/hBIvup2gfa

#BREAKING: Authorities have confirmed a tsunami of up to two meters has hit Palu in Indonesia after a 7.5 magnitude earthquake.

Our thoughts and prayers are with those affected by the earthquake and tsunami in Indonesia.
Indonesian ARMYs – may you and your loved ones be safe!

If you don't know, a 7.7 SR with a 1-2.5M Tsunami hit Donggala, Indonesia earlier this afternoon. pic.twitter.com/q3U5bjRaPU#PrayForDonggala

Big quake as well as reports of a tsunami situation in Indonesia @newscomauHQ#Sulawesi #earthquake #Indonesia #Tsunamihttps://t.co/7rO76FaSxF

#Tsunami, up to 1.5 meters high, has hit two cities, sweeping homes away and families are missing, according to officials in #Indonesia. https://t.co/hhVjs5klhL pic.twitter.com/accNRnC2Hh

A series of earthquakes struck Indonesia on Friday afternoon, killing at least one person and injuring others https://t.co/CCAvjePoLA pic.twitter.com/e2IbjKQztQ

This needs to stop. In Indonesia one football pitch of forest is destroyed every 25 seconds.

Tell big companies to drop Wilmar and dirty palm oil before it's too late for Indonesia’s rainforests >> https://t.co/HV89xBqxoy#ActOnClimate #deforestation pic.twitter.com/JHUNAucqUI

Posted in News and tagged earthquake, grindface, indonesia, tsunami
← A Week of Sexual Assault in Toronto#CoffeeWithACop →