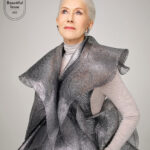 It’s not a false play at modesty, she makes clear: “Don’t get me wrong — I love beauty and I love looking at beautiful things. But I don’t like the word beauty [as it’s] associated with the beauty industry—makeup and products, skincare and all the rest of it — because I think it excludes the vast majority of us who are not beautiful.”

“There are incredibly beautiful people in the world, and it’s an absolute delight to look at them, male or female. Beautiful people are a wonder to behold,” adds the actress, who has been L’Oreal Paris spokesperson since 2014. “But most of us are not beautiful. We have other stuff, which is just as powerful as beauty. And I would like to see us celebrate those things … I love the word swagger because I think swagger means I’m confident in myself, I’m presenting myself to the world, I’m enjoying the world around me. I think what is called the beauty industry should be called the swagger industry. We’re giving people swagger.” -People

Mirren has built up plenty of swagger in her life and career, which includes more than 140 credits over 55 years. The Screen Actors Guild Life Achievement Award recipient has several films out this year, including The Duke, Golda, Shazam! Fury of the Gods and White Bird: A Wonder Story, but says she still gets nervous before starting a new project. -People

“I get very nervous about the day-to-day process. And meeting and dealing with new people. And not knowing whether I am going to remember my lines or not,” she tells PEOPLE. “I just get very frightened until I get into the swing of things and then I kind of relax.” She sleeps easier when a film wraps. “Once it’s done I’m not nervous, because it’s done, you can’t pull it back,” she says. “It’s the doing of it that I get nervous about.” (Though she still doesn’t read film reviews—good or bad.) -People

While she admits “you have to continue working on yourself to a certain extent,” the best salve for her fears has been time. “Simple really: Getting older. It happens. Other people call it growing older, but I call it growing up,” she says. “And one of the advantages is that you literally get to be wiser. Life is a constant process of learning.” -People

For the record, she has plenty of costars and famous fans who attest to her beauty.

“What makes Dame Helen Mirren so beautiful? I’ll tell you,” Vin Diesel tells PEOPLE. “She has a charisma that is timeless. She has looks to kill and always has. She has a jovial spirit. But I think the thing that is most attractive about Dame Helen Mirren is the way she makes you feel. She always makes you feel appreciated and loved. And for that, I Iove her forever.” -People