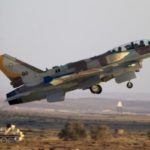 BBC news is calling the Israeli air strike against Syria the biggest since 1982.

The response was the “most significant attack” of its kind against Syria since the 1982 Lebanon war, said senior Israeli air force general Tomer Bar.

The F-16 jet went down during a mission that followed an Iranian drone launch into Israeli territory, Israel says.

The two pilots parachuted to safety before the crash in northern Israel.

Israel says it responded with a second wave of strikes on both Syrian and Iranian military targets operating inside Syria.

Israel has bombed Syria 100+ times in the past 6 years. Not to mention it has been colonizing the Syrian Golan Heights for 50 years. For Israel to claim to be the victim today is laughable. https://t.co/XNzWBMiFt7 https://t.co/mK5nVDaSvR

Open war has basically broken out between Israel and Syria. https://t.co/ezwa4oVXMg

The number of people in my timeline today that side with Syria and Iran over Israel is quite something. The level of moral myopia required to cheer on countries that drop chemical weapons on their own civilians and hang homosexuals from cranes in public squares.

I have been warning for some time about the dangers of Iran’s military entrenchment in Syria. Iran seeks to use Syrian territory to attack Israel for its professed goal of destroying Israel. pic.twitter.com/bfWinriX3h

Syria, where the battleground is
Russia vs U.S.
Iran vs Israel
Israel vs Hezb
Turkey vs Kurds
Kurds vs IS
IS vs Assad
Opp vs IS
Assad vs Opp
Turkey vs Assad
U.S. vs Iran
Hezb vs Opp
NATO vs NATO
Opp vs Kurds
U.S. vs U.S.
Iran vs Opp
EU vs Refugees
War is almost over, they said.

Whom do you blame more for the escalation in Syria?

Attacks by #Israeli forces on targets in #Syria are cause of serious concern for #Russia – FM https://t.co/7SxQR3DIRD

Israeli Air Force general says Israel's strike in Syria on Saturday was 'the biggest and most significant' since 1982https://t.co/lRAHgAcUYG