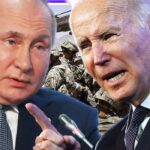 President Biden in a meeting today told the press that he was considering sanctioning Russia. President Biden insisted that there were no updates on Ukraine and advised that Russian forces had not moved across the Belarus border. Russian forces have reportedly settled along the entire Belarus border and NATO officials are eager to see if the conflict will escalate. President Biden remarked “I have made it clear – early on to President Putin that if he were to move into Ukraine, that there’d be severe consequences, including significant economic sanctions, as well as i’d feel obliged to beef up our presence – NATO’s presence in – our eastern front: Poland, Romania, et cetera.”

NATO reportedly has 8500 troops on standby should the conflict between Russia and Ukraine escalate. Biden assured the press those troops are apart of a NATO operation and not ” a sole U.S operation”. President Biden however noted that as per a discussion between himself and President Putin; that the United States under the leadership of President Joe Biden would be willing to reinforce NATO troops as per Article 5 of the NATO Allies obligation. President Biden went on to say, “And I’ve spoken with every one of our NATO Allies in person – not “in person,” virtually – and we’re all on the same page. President Biden also spoke on his commitment to the allies stating, “We’ve got to make it clear that – that there’s no reason for anyone – any member of NATO to worry whether or not we would – we, NATO – would come to their defense.

President Biden also assured the press that although the U.S or any of the allies does not plan on entering Ukraine , there are still concerns specifically from Poland that Russian troops will breech the border. There is a serious threat that Russia will be placed on strong economic sanctions and President Biden assured the American Public that he won’t hesitate to make that decision should the need arise. Biden admitted, “the fact that he continues to build forces along Ukraine’s border from Belarus all the way around – you’d say, “Well, that means that he is looking like he’s going to do something.” The “he” president Biden was referring to was Russian President Vladimir Putin. President Biden also acknowledge that the decision of entering or not into the Ukraine would lie with Prime Minister Putin.

If the Russian Prime Minister did plan on continuing with their invasion of the Ukraine; it would be the largest invasion of forces since Word War Two. President Biden pondered that such a large scale military operation “could change the world.” At this time the President enforced that American troops would not be entering Ukraine and these are strictly talks about economic sanctions. The President stated, “There is not going to be any American forces moving into Ukraine…. We’ll see.. “Stay Tuned,” as they say.”