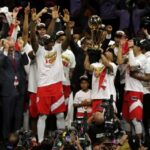 The Toronto Raptors have announced their plans for a Monday morning parade to celebrate their historic NBA Finals win, ending with a party at Nathan Phillips Square.

The parade will depart from the Princes’ Gates at Exhibition Place at 10 a.m., before heading east on Lake Shore Blvd., then north on York St., north on University Ave. before going to Nathan Phillips Square via Queen St. W. for a celebration rally from 12:30 p.m. to 1:30 p.m. -TheStar

It was about an hour before the start of Game 3 of the NBA Finals when I arrived at a friend’s house to watch the action on his giant TV. I parked on the street and just before I got out of the car my attention was captured by what was on a neighbour’s front lawn.

There was an old hockey net on the grass up against some bushes. It didn’t look like it had been used in a while as the grass was beginning to grow over the edges. Beside it was one of those brand new, towering, fancy NBA-approved basketball nets.

I took a picture, posted it on Instagram and labeled it, “The New Canada.” Within hours it had received more than a thousand likes and people were commenting that they were seeing similar scenes in their communities across the country. -CBC

TORONTO – The Toronto Raptors may have missed a chance to close out their first NBA championship, but they were a winner once again in the ratings.

Sportsnet announced Tuesday that it set another Canadian record for an NBA game with an average of 6.4 million viewers for Game 5 of the NBA Finals, a 106-105 win by the Golden State Warriors at Scotiabank Arena that cut the Raptors lead in the best-of-seven series to 3-2.

The broadcaster says audience levels peaked at 8.5 million at 11:32 p.m. ET, as the game was coming down to the wire.

The numbers includes viewers on Sportsnet and Citytv, but does not include people watching the American feed. -CP24

After one final frenzied few seconds, when they seemed to be ready to snatch defeat from the jaws of victory, the Raptors finished off a 114-110 victory over the Golden State Warriors here Thursday night, capturing the first NBA championship in franchise history on their first trip to the NBA Finals, an unprecedented feat for a team that was once an afterthought in many fans’ minds.