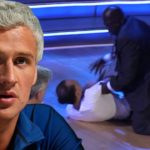 Ryan Lochte posted the picture of the IV infusion on his OWN SOCIAL MEDIA. How does he remember not to breathe underwater.

Ryan Lochte has less than $800,000 a year in deals left after the robbery scandal. He'll lose a chunk more of that now.

US Olympic swimmer Ryan Lochte has been given a 14-month ban for a doping violation.

This is amazing, even by Ryan Lochte standards. He got himself banned by posting a picture on social media. https://t.co/iID6a7JU3E

I love Ryan Lochte so much. Posts an Instagram of himself getting an IV drip.

US swimmer/Olympic liar Ryan Lochte accepts 14-month sanction by USADA for intravenous infusion of permitted substances at an infusion clinic in a volume greater than 100 mL in a 12-hour period without a Therapeutic Use Exemption (TUE) pic.twitter.com/6JezRkYcfW

Let’s check in on *how* Ryan Lochte got suspended pic.twitter.com/eJN78LgPil

When doing it for the 'gram goes wrong: 14-month ban for Ryan Lochte after he posted an image of himself injecting an infusion (prohibited method without prior approval) on social media. https://t.co/ZH5ug8yu20

In May, Ryan Lochte posted a picture of himself receiving an intravenous infusion on social media. That triggered a USADA investigation, and he’s just been banned for 14-months for use of a prohibited method (100ml is allowed, more is not without TUE) . https://t.co/SmlhVB0ezd

Where do I repent for previously finding Ryan Lochte attractive

This is the photo that got Ryan Lochte banned 14 months. pic.twitter.com/1CljxSFlzy

Ryan Lochte at a press conference now: "I wasn't taking anything illegal. Everything was legal. You can get it at CVS, Walgreens, but there are rules, and you have to obey them. … Don't worry. I'm not giving up. I'm going to keep going [to Tokyo 2020]." pic.twitter.com/3APLMvCyFK

Everything wrong in this world: Ryan Lochte is suspended for a vitamin IV and Trump is still in power.

Ryan Lochte is a giant fool to post his IV-fusion on social medier but to think he is the only one using this non-traceable method would be quite an illusion. Just another example of the hopeless Wada-code. Making rules that everybody can bypass as long as you don't post it on FB https://t.co/Wzjj0PaHlh

Olympic swimmer Ryan Lochte, has been suspended until July 2019, due to use of an IV dated back in May; breaking anti-doping rules. This will be his second suspension since the 2016 Rio Olympics. pic.twitter.com/JmEgOtyPIx

I like to share this video whenever the world feels especially shitty, (which sadly is happening more and more), because I truly believe that it is essential to be able to laugh in times of tragedy. And since dumbass Ryan Lochte is trending, it's perfect. https://t.co/ALqggCWxg5

at least in the wild times of 2018, we have one constant – Ryan Lochte is still the biggest dumbass.

Ryan Lochte Busted for Breaking Anti-Doping Rules After Snitching on Himself https://t.co/HsgfrQq51Y