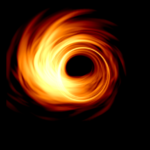 Black holes have been mysterious and elusive — until now. Astronomers using the Event Horizon Telescope (EHT) have, for the first time, photographed one.

“We’ve now seen the unseeable,” said Avery Broderick, a physicist at the University of Waterloo and the Perimeter Institute who was part of the international EHT research team. “Black holes are made real — they’re not just the scribblings on theorists’ chalkboards anymore, but they really are out there in the night.”

The image, which shows an orange ring around a round, black silhouette, is of the black hole at the centre of Messier 87 (M87), a galaxy 50 million light-years from Earth. This black hole is one of the most massive known: it’s six billion times more massive than our sun. -CBC