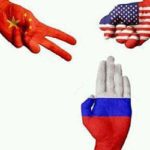 If the @GOP get to bring in Russia as their ringer. We get to bring in our own country, and I pick China. So let me be the first to say… China, if you're listening? I hope you can find Donald Trump's tax returns. pic.twitter.com/OHz8wePPqZ

“The FBI only looked at 3000 of 675,000 Crooked Hillary Clinton Emails.” They purposely didn’t look at the disasters. This news is just out. @FoxNews

Justin Trudeau called out a heckler for her racist comments. pic.twitter.com/bW8xqrHhuj

…Secretary Pompeo looks forward to going to North Korea in the near future, most likely after our Trading relationship with China is resolved. In the meantime I would like to send my warmest regards and respect to Chairman Kim. I look forward to seeing him soon!

Justin Trudeau has a new strategy for dealing with the illegal border crisis: call everyone who disagrees with his approach a racist #cdnpoli pic.twitter.com/8nGspy1AJ3

Big story out that the FBI ignored tens of thousands of Crooked Hillary Emails, many of which are REALLY BAD. Also gave false election info. I feel sure that we will soon be getting to the bottom of all of this corruption. At some point I may have to get involved!

Jeff Sessions said he wouldn’t allow politics to influence him only because he doesn’t understand what is happening underneath his command position. Highly conflicted Bob Mueller and his gang of 17 Angry Dems are having a field day as real corruption goes untouched. No Collusion!

"Kenya’s crushing debt to China now threatens to turn its busy port of Mombasa — the gateway to East Africa — into another Hambantota."
China's creditor imperialism | The Japan Times https://t.co/trE1vp0BKY

Proud to stand with leader Andrew Scheer for lower taxes, balanced budgets and free enterprise. Justin Trudeau is the most socialist Prime Minister in a generation. We can’t afford another four years.

Listening to @AndrewScheer #CPC2018 convention speech and all I’m hearing is “Justin Trudeau this, Justin Trudeau that”. Premier Lougheed had a simple rule: Never mention your opponents. Instead, show what you can do better.” Not in this speech…

A Canadian isn't a Canadian anymore according to @JustinTrudeau. He continues to divide Canadians while helping others. #cdnpoli pic.twitter.com/gAbxkxs9sI

.@DavidCayJ wonders how many GOP lawmakers does it take for Congress to obtain Donald Trump’s tax returns so staff experts can scrutinize them? pic.twitter.com/wHbLBtEIrY

Britain, which is about to leave the European Union, is looking for a launch pad for better relations and trade deals with Africa, US President Donald Trump wants to improve his battered image in the continent while China is interested in advancing its cheque book diplomacy

#WATCH London: Rahul Gandhi responds to question on Doklam; says "Chinese troops are still in Doklam & have built massive infrastructure there. PM went recently to China & didn't discuss Doklam…Somebody comes here, slaps you on your face & you have a non agenda of discussion." pic.twitter.com/8CbSxYfndR

In a world like this, with over 566 fires burning in BC alone, how can any government be building (or buying) new fossil fuel projects? @JustinTrudeau

.@realDonaldTrump-You’re attacking Hillary to distract, but no one is listening. We care about what YOU did. Because you are a crook. A criminal who committed election fraud with Manafort who was found guilty and Cohen who pled guilty. You’ll plead guilty too. #TrumpResign #AMJoy https://t.co/lJu56jAzyt

As discussed repeatedly on #TheIngrahamAngle, we shd be doing more to improve relations w/Russia to triangulate against China, the far greater threat. https://t.co/h4t1g91Pig

Donald Trump continued to attack John McCain in the same week he announced he was stopping medical treatment https://t.co/7PMBcGK6Gm . pic.twitter.com/eKl5dJuyAE

Canada cannot afford another 4 years of Justin Trudeau, and we will be the party led by ⁦@AndrewScheer⁩ to get this great country back to where we need to be. pic.twitter.com/ZqRDXiSFqq

First time in the history of ???Canada Muslims were invited inside the Parliament to celebrate EID. And who's the architect of this event? None other than our own Prime Minister @JustinTrudeau The Hero and the heart❤️throb of Millions. Justin Trudeau ??Zindabad ???
? pic.twitter.com/l4i6Spuaxm

And now hundreds of jubilant straight white people surround Andrew Scheer to thank him for comforting their racism and homophobia, and for promising he won't shame them like Justin Trudeau. #cdnpoli #CPC18 pic.twitter.com/HJYURX4fLW

Trump's ex-doorman claims the President had an illegitimate child with a housekeeper https://t.co/YtMJLq2gvg

The campaign finance case against Donald Trump is strong. Stronger than the one against John Edwards: https://t.co/SFLSFn8iSN pic.twitter.com/ZPRqdrZSMs

I can't wait to see how Conserative media and punditry will blame Justin Trudeau for Maxime Bernier leaving the Conserative Party of Canada? #cdnpoli #cdnmedia

What Justin Trudeau doing is robbing from our and it’s just wrong.

Under my leadership, the deficits will come to an end. We will balance the budget and once again and put Canada’s fiscal house in order.

Of the 7.5 billion people on the planet, these are the nine who have the power to end much of life on earth by firing nuclear weapons. #justsaying

More and more countries are seeing the debt trap in China Pres Xi Jinping's Belt and Road initiative–and saying no. (Though corrupt officials still like its no transparency, no oversight loans.) pic.twitter.com/z5mqQQc6Cu

Since 2013, the year President Xi Jinping proposed the Belt and Road Initiative, some amazing changes have taken place pic.twitter.com/pYiC3aIizB

President #XiJinping on Friday called for strengthening the centralized and unified leadership of CPC over advancing law-based governance in all areas, while presiding over the first meeting of the Commission for Law-based Governance of the CPC Central Committee pic.twitter.com/8PqvLPkMib

.@LAWPROFBUTLER: Those 19 Russians who were indicted — #Mueller says that they actively conspired not just in some vague way to subvert democracy but to put #DonaldTrump in the White House #AMJoy pic.twitter.com/gB8dqrNU04

"We don't have to love Donald Trump and hate the CIA or vice versa. You can not like Donald Trump and not agree with Donald Trump's policies but not throw your lot in with the CIA and the FBI and the likes of John Brennan." – John Kiriakou w/@aaronjmate https://t.co/YeKuBVO7mi

The Art of Rewriting History, a must-read by Zhi Yin (under Qian Gang's direction) about an oil painting that is placing Xi Jinping's father at the center of the reform project, and downplaying Deng. https://t.co/13r7UsFhf9 pic.twitter.com/CgBknO3Bpo

Literally no one cares what Trump did before he was in office. Bill Clinton actually paid off rape accusers WHILE he was in office. It's the history of now with these libtards, but they'll just shriek and call it whataboutism.

⁦⁩ W/ @JustinTrudeau & EMBC staff⁩. So many firefighters, volunteers & communities stepping up to fight #BCWildfires & support people. Much gratitude 4 all & pride 2B Parliamentary Secretary for Emergency Preparedness working with this great team of folks. #bcpoli pic.twitter.com/kKNQwQWu99