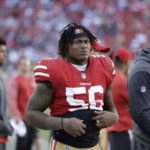 Prosecutors in Florida have decided not to pursue a domestic violence charge against Washington’s Reuben Foster more than a month after he was released from the San Francisco 49ers following his arrest.
Prosecutors in Tampa filed a notice of termination of prosecution on Wednesday. The notice says the first-degree misdemeanor battery charge is dismissed and there is no need for Foster to appear at any future court hearings. Neither prosecutors nor Foster’s defense attorney, Eduardo Suarez, responded immediately to requests for comment.
Foster was arrested at the team hotel in Tampa in November and jailed overnight following an incident involving the NFL linebacker and a female companion. Police identified his companion as the same woman who accused Foster of hitting her in February. The woman later recanted the earlier allegations. -TheGuardian

While Foster might no longer be in legal trouble in Florida, his NFL career remains in limbo. Shortly after the Redskins claimed him off waivers, Redskins coach Jay Gruden said he didn’t know if Foster would ever play for the team.

“There’s no guarantee he’s ever going to play here,” Gruden said. “He’s got a lot of work to do — personally, with the team, with the NFL, with himself — before he even thinks about playing football again.” -NFL