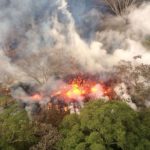 Hawaii’s Kilauea volcano has erupted anew before dawn, shooting a steely grey plume of ash from its summit about 9,100 metres into the sky that began raining down on a nearby town.

“We may have additional larger, powerful events.”

The explosion happened about 4:00am (local time) after two weeks of volcanic activity that sent lava flows into neighbourhoods and destroyed dozens of homes.

Scientists said the eruption was the most powerful in recent days, though it probably lasted only a few minutes.-ABC

For an entire week, Hawaii's Kilauea Volcano has been spewing lava. And now, a new threat: The Hawaiian Volcano Observatory identified a new fissure in the ground, the 15th surface crack where lava and gasses are escaping: https://t.co/7y2SOoONpn pic.twitter.com/Aq13quQwbW

? The Hawaiian Volcano Observatory said Sunday that the lava flow from the Kilauea volcano has traveled more than half a mile, and aftershocks continue to shake the region. https://t.co/sbmTxjaArK pic.twitter.com/WngBT7MbyK

"Ballistic blocks" shot from Kilauea's Halemaumau crater Wednesday, which USGS says it is the first time such an event has been seen at the Hawaiian volcano in nearly a century. https://t.co/I2Vfn4dH3J

#BREAKING: The ash plume from Halemaumau Crater is now as high as 12,000 feet above sea level, the Hawaiian Volcano Observatory says. An ashfall advisory has been issued for the Ka'u District, and ash and vog have been reported in Pahala. #hawaii #volcano ?#HNN pic.twitter.com/FWoNDIYYbm

Do not order Fish tacos from an Irish Pub.

Tutu Pele is alive and well. If you can, donate to Hawaiian Relief for both the volcano eruptions on the big island and the floods that affected Kauai. pic.twitter.com/40T60qnKM6