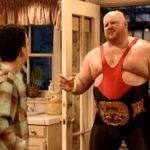 The WWE, WCW, All Japan and New Japan star had been documenting ongoing heart and other health issues via social media for years, including Nov. 2016 messages saying doctors told him he only had two years to live due to congestive heart failure. He walked back that prognosis after meeting with other medical professionals, but was undergoing surgeries and treatments while stating a desire to continue wrestling.-Cage Side Seats

It is with a heavy heart to inform everyone that my father, Leon White, passed away on Monday night (6/18/18) at approximately 7:25pm. pic.twitter.com/dP4CNaMuXa

Around a month ago my father was diagnosed with a severe case of Pneumonia. He fought extremely hard and clinically was making progress. Unfortunately, on Monday night his heart had enough and it was his time. pic.twitter.com/hJYjumvxjH

Incredibly sad news about Big Van Vader, truly one of the best and arguably most underappreciated big men in wrestling.#RIPVader https://t.co/2zzCAnufA6

Teaming with Vader in @SCWPro was one of my career highlights. Leon was a joy to be around and his passion for this business was so very apparent. He will be missed. #RIPVader https://t.co/rSfJugM30B

Saddened to hear of the passing of Leon White, aka Big Van Vader, aka Vader. If you only knew him from his WWE run, look into his prior work, too — such a dominant character and performer. One of the best "monsters" in wrestling history. pic.twitter.com/tZktYUA7Y7

As great as Vader was, the most badass thing he did was make such a strong name for himself outside of the U.S. that WCW basically had to bring him in and build around him, barnstorming his way to the top as the best super heavyweight anyone had ever seen.

Former wrestler Leon White, famously known as Big Van Vader (@itsvadertime), has died after being diagnosed with pneumonia last month. He was 63. https://t.co/5fkNAt6MuF

Leon White, known to wrestling fans as Big Van Vader, has died after a history of heart problems https://t.co/fshaJOYKpY

We send our deepest condolences to the family, friends and fans of Leon White (aka BIG VAN VADER) who passed away last night.

Big Van Vader has passed away at the age of 63

RIP Big Van Vader. One of the best of all time pic.twitter.com/nDlZBILTIh

Rest In Peace Big Van Vader. You will be missed. pic.twitter.com/S1icO0G14q

One of the first wrestlers to truly capture my imagination as a young boy,the dominant mauler Big Van Vader, portrayed so well by the incredibly gifted Leon White,by all accounts a generous and compassionate soul,may he rest in peace #njpw #ajpw #noah_ghc #wwe #ItsVaderTime pic.twitter.com/LcvTJmUCxK

Very sad to hear that Leon Allen White has passed.

RIP Big Van Vader. One of the best “Big Men” ever. pic.twitter.com/2hyneKinpm

Rest In Peace Big Van Vader, loved you in the ring and on Boy Meets World. Growing up and being a big fan of both wrestling and this show, these episodes made me the happiest! pic.twitter.com/fKNujjxMzS

WRESTLER WEEKLY is saddened to learn of the passing of Big Van Vader. Vader is arguably the best big man to set foot in the squared circle. Our condolences to his family, friends, and fans across the world. #RIPVader pic.twitter.com/mx0N5lx5bQ

RIP Vader. How about this for a photo. This is Leon White; I mean Big Van Vader's photo from his NFL days. He was a 3rd round pick of the LA Rams and was a member of the Super bowl XIV team that lost to Pittsburgh. #WWE #WCW #Wrestling #VaderTime #Vader pic.twitter.com/o80L494Cus

Sad to hear of the passing of the best "big man" the sport has ever seen, Big Van Vader. If you were a fan in the late 80's, early 90's you will remember how mind blowing it was seeing him dropkick, moonsault, etc, when men of his size would normally stick to a bear hug! pic.twitter.com/J0I1FFivTZ

So sad to hear the news about Big Van Vader today ?

I was lucky enough to meet him & he was really lovely & engaging. I asked him which poster I should get signed & he said

“My feud with Flair was fun. My feud with Foley was a war but Sting, Sting is THE one”#RIPVader pic.twitter.com/LnPt40kT6p

Rest In Peace Big Van Vader..We will all Miss You Mr White pic.twitter.com/JmbpxlZBy7